It doesn’t matter which team you support — Secretary-General Ban Ki-moon took to the pitch in Madrid on Saturday to call on everyone to support unprecedented efforts to meet the needs of the world’s poorest.

He performed the ceremonial “kick off” before a game between Read Madrid and Levante as part of series of events highligting a vital moment in history’s largest and most successful anti-poverty push.

Wearing a UN shirt with the number 1,000 on the back, he drew attention to the 1,000-day mark before the target date to achieve the eight Millennium Development Goals – which range from halving extreme poverty to halting the spread of HIV/AIDS and providing universal primary education, all by the target date of 2015. 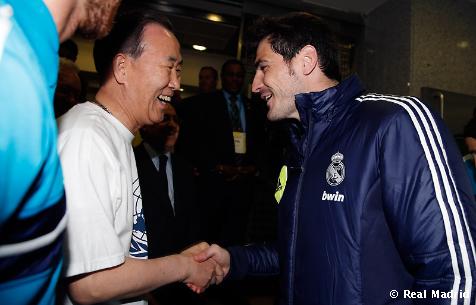 In an interview, he said, “I’ve watched Real Madrid matches for years and its one of the best teams in the world. I particularly like Casillas [pictured here] , who is a good United Nations ambassador for the Millennium Development Goals.” Read more.

UPDATED: Take a look at these photos and see below for videos.

After the match, the Secretary-General said a few words about his particpation, saying he hopes the MDGs will “kick out poverty for one billion people around the world.”